IN FAMILY COURT 246 ONLY THE PREFERED PARENT CHOSEN BY THE COURT POSSESSES ANY RIGHTS.

A very important motion to modify a ruling that would possibly return a father to his home and children started June 30 but was reset about 6 times. This order reasons an alleged murderer was sentenced to death prior to a trial, then the court realizes the sentence cannot be carried out without a trial. The court then attempts to insert a trial while the alleged prisoner is sitting on death row.

Court 246 Has done all it can to show its bias and one sided justice. From taking away residence and children, to entrapping a child granting a TRO the same day accepting a motion ensuring the child would be in court to be nabbed by opposing counsel and rushed to a waiting elevator while the father searches helplessly for the child he brought into court. Evil and heartless actions have dominated a court that was approached to bring a horrible marriage to an end.

This cannot be American justice. This is mid evil justice pirate like injustice. The court has entered a number of unfavorable rulings since June 21 when a default hearing was heard by the court.

The ruling to modify could have changed the dynamics of the cases since several issues including constitutional would have surfaced. Decisions since have been all in favor of opposing party seemingly favored by the court. 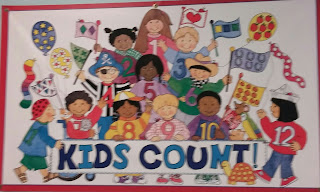 When this trial ends the interest of children should be served. Family court has all but ensured that children will end in a disadvantaged condition. They have lost months of support that money cannot buy, uncertainty regarding permanent residence and interrupted medical care. They are on the way to being State dependents and they now have a remote father and part time at best mother if they have their way.

They are refusing hearings, ignoring their prior rulings and frustrating witnesses by not concluding hearings for months even when witnesses are present in court time and time again. Family court continues to show bias by ruling against a contempt charge from its own court and signed by both Judge and Attorney General. The court continues to up hold child support and other costs aimed at bringing a parent to his knees for standing up to persecution of the court and judicial lynching be the judge. 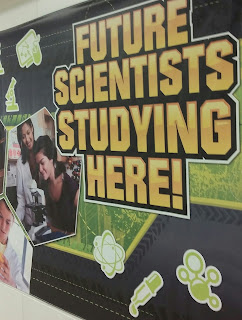 . Family court has to abide by the constitution they have to provide due process and should not use the court to bully participants and create an atmosphere of fear and intimidation.
Posted by Jules Williams at 12:00 PM No comments:

When a judge is against a party to a case nothing will get in the way of his / her bias.

At a hearing held 10th October 2016 family court judge court 246 Houston hearing a contempt case said an order granted by the court last year was not signed by the defendant and denied the motion on that basis and although the order detailed which party would file taxes for each of two children, the judge claimed that the document was between myself and the Attorney General office and so his signed order was unenforceable. Below are the signatures associated with the motion, clearly showing signatures to the court order to include the Judge, Attorney General and Defendant. 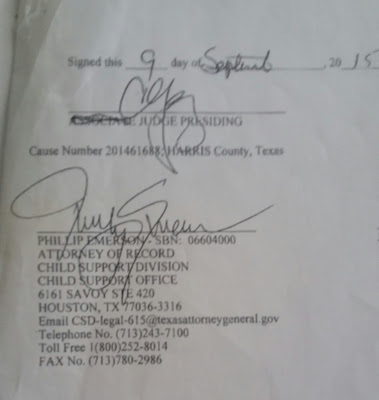 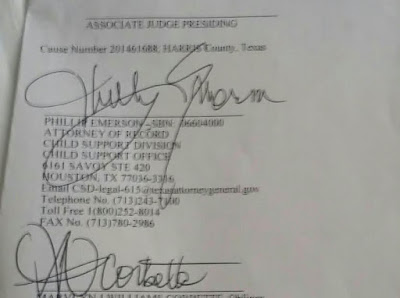 From the above signatures for the court, the attorney General office, the defendant and the judge are on the document instituting the court order. What is more interesting with the judges ruling is the plaintiff and defendant appeared prose and gave testimony under oath in the presence of a court reporter and Judge at court 246. How was the judge able to establish that I had a agreement in some back room with the AG representative and the document signed by the court is unenforceable. If this is not bias to the extreme then the meaning of bias needs to be changed. Court 246 will account for bias shown in rulings at some point. I am calling for a review of similar cases from court 246 Houston Texas.
Posted by Jules Williams at 10:04 AM No comments: